January 16, 2019
OpenMoonstone is a open source reimplementation of Moonstone: A Hard Day's Knight following along the lines of projects like OpenTTD and OpenXcom. You can try it out https://github.com/joetsoi/OpenMoonstone

This release is a milestone as it contains the same number of features as the original demo that came out on the Amiga.


Why reimplement an old game?

Enemies always face the player in Moonstone, in the original this meant that for the AI controlled knights, the distance the knight would move was out of sync with the animation causing a "jumpy" animation.

I've added the ability for four players to fight at once. The amiga only had two controller ports so was restricted to two players, as a child I always wanted a three way battle with my brothers and adding additional entities in an ECS is easy once it's all set up. 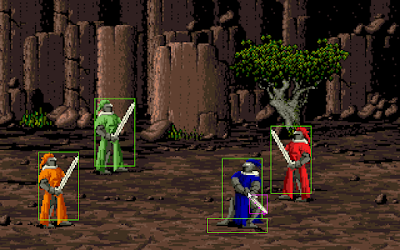 As a side project

It's hard to stay motivated when working on a side project, but this has a few advantages
But it has some distinct disadvantages
This is the probably the furthest I've ever got with a side project, in the future it would be nice to add modding or other features but not  for a while.

Digging into python memory issues in ckan with heapy

So we had a report about a memory leak when using the ckan datastore extension, where large queries to the datastore would leak large amounts of memory per request. It wasn't simple to get to the bottom of it, at first I couldn't recreate it the leak at all. The test data I was using was the STAR experiment csv files, which I found when I googled 'Large example csv files'. The reporter Alice Heaton, had kindly written a script that would recreate the leak. Even with this, I could not recreate the problem, until I upped the number of rows fetched by a factor of ten. I suspect that Alice has more data per column with perhaps large text fields instead of the mainly numeric data of the STAR experiment data I was using. Once I could reliably recreate the problem, I ended up poking around using heapy , which I've used previously to track down similar problems and inserted some code to setup heapy and an ipdb breakpoint from guppy import hpy hp = hpy() heap
Read more

July 10, 2015
A while back a group of friends and I went through a spate of playing TTT(Trouble in Terrorist Town), to the point where we ended up playing during that Christmas day post dinner lull. For me, TTT scratches the traitor game mechanic that you can find in board games like The Resistance, Battlestar Galactica and Shadows Over Camelot which you don't really get in any other computer game. Unlike these games, the number of traitors is rigidly defined by the total number of players by a formula. local function GetTraitorCount (ply_count) -- get number of traitors: pct of players rounded down local traitor_count = math.floor (ply_count * GetConVar( "ttt_traitor_pct" ):GetFloat()) -- make sure there is at least 1 traitor traitor_count = math.Clamp(traitor_count, 1 , GetConVar( "ttt_traitor_max" ):GetInt()) return traitor_count end This means that for a given number of players, the number of traitors/innocents is the same each round. This i
Read more

September 09, 2015
From ckan 2.5 onwards you will be able to translate the strings in ckan extensions in a much more friendly and easy way. Unless there are any major issues in the code review, this pull request should make your life easier. Previously, there were a few, not ideal solutions (see ckan#959 ) which involved having a paster command or script that would munge all the po/mo files together using gettext's msgcat command. This has the downside that the sysadmin of any ckan instance would have to run this script and whatever other series of texts whenever they had a new ckan extension that they wanted to add. The new pull request allows extension writers to provide a translations that will automatically be included without any additional steps other than the standard step specifying the plugin in the ckan.plugins in the configuration file. To do this you'll need to copy the example plugin and edit your plugin so it looks a bit like ... from ckan.lib.plugins import DefaultTr
Read more